Jane Tibbets Schulenburg (Forgetful of Their Sex) believed that Clotilda became the prototype for later Catholic queens and noblewomen. and Katherine Scherman (The Birth of France) wrote of Clotilda:

Her selfless dedication is the obverse side of the Merovingian nature…the pure and literal application of the teaching of the primitive Church. People like Clotild[a]…add a dimension of light, like the sun shining in back of a cloud, to the dismal and stormy climate of post-imperial Europe.

Of course, it must be remembered that Clotilda was, in fact, a Burgundian, not a Merovingian!

After the murders of her grandsons, Queen Clotilda lived a life of chastity and charity in Tours, though she still played a political role. She made many private donations. In Clermont, she gave a priest, named Anastasius, a gift of land and the title that proved his right to them. The Bishop of Clermont, Cautinus, sought to keep the lands for himself by dint of his authority, but Anastasius maintained his rights to the land, even after being tortured. Anastasius eventually escaped and complained to King Lothar, who upheld the legitimacy of Clotilda’s gift.

JoAnn McNamara and John E. Halborg in Sainted Women of the Dark Ages hypothesized that Clotilda went to Tours in the relatively newly acquired Aquitaine, where Clovis was commissioned as patrician of Rome, as "part of an ongoing Frankish policy of reaching a solid settlement with the old Gallo-Roman population." They also noted that female saints "regularly diminished the gains of their warrior relatives by almsgiving." This "suggests that they were playing a sort of structural role in the circulation of wealth, possibly as representatives of the more merciful or 'womanly' side of monarchy." 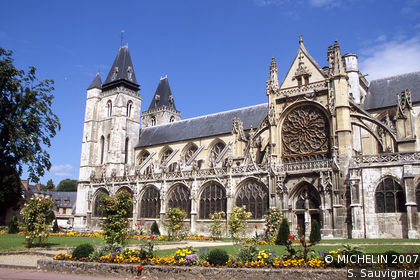 Clotilda also funded the building of many churches and monasteries and gave lands to support them. Among these was the Notre-Dame-des-Andelys, located along the Seine near Rouen. It was the last church she founded and around its founding and construction a story was circulated.

According to the story, the men working on the church requested of Clotilda that wine be provided to slake their thirst during the hot summer days. While she considered the request, a spring of fresh water was discovered nearby. In a dream, Clotilda was told that if the workers were to request wine again, that she should send a servant to take them some water from this newfound spring. When the request was so made, and the water delivered, the workers discovered that the water had turned to wine. They went to the queen and gave thanks. The queen gave credit to God for the miracle and asked none to reveal the miracle. The situation continued throughout the construction of the monastery, but only occurred for the workmen working on the structure. All others who drank the water tasted water. When the monastery was completed, the miracle ended and the spring returned to its natural state for one and all.

Clotilda did not totally remove herself from the lives of her sons, and perhaps her most famous miracle was associated with her concern for their welfare. According to Gregory, her son Childebert and step-grandson Theudebert were at war with her son Lothar, who had the weakest army of the three. He retreated to a forest near Caudebec in Normandy and entrenched himself and prayed for his safety. His mother also prayed for the intercession of St. Martin in hopes of averting another family tragedy. When Childebert came near Lothar’s position, a thunderstorm occurred, lightning flashed, the wind howled, and hailstones fell. Soldiers covered themselves with their shields and horses ran away. Meanwhile, those in Lothar’s camp heard nothing, all was quiet and no storm raged. Unnerved, Childebert and Theodebert begged for God’s mercy and retreated. Peace was made with Lothar and each returned to their own lands. Such was the nature of the intervention of St Martin, at the behest of Clotilda. Her prayers were said to have inspired St. Martin’s miracle.

She also seems to have rewarded some Burgundian religious men who had accompanied her to Clovis’ kingdom. In the years 520 and 521, she appointed three elderly men to be Bishops of Tours. Gregory of Tours wrote that Theodorus and Proculus, the tenth Bishops of Tours, had come with Clotilda from Burgundy as consecrated Bishops but "had been expelled from their cities because they had incurred hostility there." She appointed them jointly in early A.D. 520 when they were both old men and they led Tours for approximately two years before dying and being buried there. Dinifius, who had also come from Burgundy, succeeded to the Bishop’s office, also at the behest of Clotilda, in A.D. 521. She gave him property from the royal domain to do with as he wished. He gave most of it to his own cathedral and left the rest for "deserving people." He was only Bishop for ten months.

Clotilda died in Tours in 545 A.D. and was carried to Paris and buried by her sons Childebert and Lothar in Saint Peter’s church next to her husband Clovis. Gregory wrote:

Neither the royal status of her sons nor her worldly goods nor earthly ambition could bring her to disrepute. In all humility she moved forward to heavenly grace.

Clotilda, perhaps the brightest shining light of the Burgundians, served as a light in the darkness for the early barbarians. Through her, the first real king of the Franks was Christianized and secured the faith in Europe.