Germanic Contact with the Roman Empire - Life Along the Limes

Though their early history has remained clouded, Burgundian contact with Rome has enabled a better understanding of how Burgundian society evolved. After initial attempts during the first and early second century to penetrate beyond the Rhine and Danube, Rome created an artificial frontier, the limes, between the empire and the barbarians. This frontier stretched from the Rhine north of Koblenz to the Danube valley near Regensburg.

The area immediately to the east of the limes was settled by barbarians, perhaps under a treaty with Rome. The Romans also saw the importance of rivers in connecting Rome with this frontier. 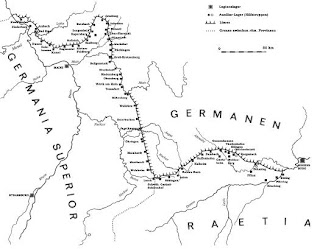 Source (original link now defunct)
While historians once thought that the rivers formed a sort of border, it has become recognized that these rivers were not political limits but the outer limit of logistical support for the empire. The forts on rivers such as the Danube and Rhine were supply depots, not defensive installations, though they would sometimes serve that purpose. Thus, the limes served less as a barrier to barbarian invasion, and more as a “free trade zone” shared with the barbarians. It was indeed a frontier rather than a border.

The limes were the areas in which the greatest amount of commerce between the Romans and barbarians occurred. Exposure to Roman culture through trade resulted in a fundamental change in Germanic society. 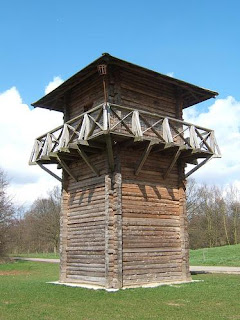 Source
Rome believed trade was a stabilizing force that could civilize the barbarians. Roman leadership hoped that the barbarians would come to rely and value Roman goods to the extent that any disruption in trade, such as by raids or war, would end. Apart from trade, Roman policy also allowed for the liberal dispensing of gifts to achieve the desired results. These Roman policies of trading and gift-giving were followed with three goals in mind, according to C.D. Gordon (“Subsidies in Roman Imperial Defence,” Phoenix 3, no.2 (1949): 67-68): “to buy alliance and active military help against more formidable enemies; to buy immunity from attack; and to create division among the enemies of the empire so as to maintain the frontiers intact.” Gordon also noted:

Of considerable interest are the effects which this policy had on external trade and the internal economy of the Empire, and on the barbarians who received the subsidies. Recent history has many examples of trade agreements by which one government has lent or given large sums to another government for purposes that will benefit both. The Canadian and American credits and loans to Europe have not been made in a spirit of pure philanthropy, but with the idea, among others, of stimulating the home industries by providing purchasing power for local products in foreign countries. Without imagining that Rome ever paid subsidies with this in mind, we can see that the sending of Roman money to foreigners must have helped the Roman export trade, especially to the barbarian north which had so great a need for Roman manufactures.

In accomplishing these goals the Roman policy was, at least initially, successful for both sides. The trade and subsidies had the desirable economic effects on the Germanic people. The Germans along the borderlands became accustomed to the quality of Roman goods and they also converted to a money economy. Cassius Dio, governor on the Danube in the early third century A.D. remarked:

The barbarians were adapting themselves to the Roman world. They were setting up markets and peaceful meetings, although they had not forgotten their ancestral habits, their tribal customs, their independent life, and the freedom that came from weapons. However, as long as they learned these different habits gradually and under some sort of supervision, they did not find it difficult to change their life, and they were becoming different without realizing it.

UP NEXT: Conflict and Commerce