Welcome to the 59th edition of Carnivalesque!!! This is an Ancient/Medieval version. Without further ado, onto the links.....

Duane Smith at Abnormal Interests continues going over Akkadian prayers (on stone tablets) and is in a speculative mood.

N.S. Gill's Ancient History Blog discusses mythological explanations for athletic contests (like the Olympics). Turns out it had to do with memorializing: adversaries, rivals and even a python.

Mike Anderson's Ancient History looks at the great civilizations of antiquity. Sounds like a topic worthy of debate.

Bill Caraher at the Archaeology of the Mediterranian World has some thoughts on digitized archeological notebooks and their values as (re)sources all their own.

Mary Harrsch at Roman Times wonders whether or not the new Starz series "Spartacus: Blood and Sand" will "resurrect old stereotypes."

Phil Harland at Religions of the Ancient Mediterranean looks at an instance where the Ephesian branch of the “Worldwide Dionysiac Performers” guild--an ancient version of the Screen Actors Guild, if you will--honored a benefactor.

LacusCurtius & Livius continues its series on Common Errors About Antiquity with #29 - Roman Chronology.

The Cultivated Classicist (Matthew Rogan) looks at the controversy surrounding ownership of the "Victorious Youth" and asks, "Where do artifacts belong?". "[S]cholarship should have no national boundaries" and institutions shouldn't be punished for the sins of the past. For all the latest controversies, check out Looting matters.

Melissa's Medieval History Blog reports the discovery of the Byzantine road that validates the accuracy of the Madaba map. Medieval News reports on the uncovering of a 1,400 year old Byzantine wine press in Israel. Hmmm. Looks we've now got directions to a great place to party, old-style.

Adrian Murdoch at Bread and Circuses takes a look at some recent books covering Late Antiquity.

Jeff Sypeck at Quid Plura has been obsessed with gargoyles lately.

Muhlberger's Early History summarizes the medieval lawsuit over a coat of arms (Scrope vs. Grosvenor) and discovers Google Books has digitized one of the two volumes required to read up on the case.

Derek Olson at Homiliaria crawled through the e-codices virtual Manuscript Library of Switzerland "to find what sort of homilies and homiliaries it had hiding in it", especially those related to St. Gall. Success! (And he made a list).

Jared at Antiquitopia says Saint Augustine has a lot to say about, well, a lot...including the reason for the male nipple.

Richard Nokes at Unlocked Wordhoard directs us to this piece by K.A. Laity explaining that it was Geoffrey Chaucer who got the ball rolling with the whole Valentine's Day thing. Generations of men thank thee, Geoff. (But I still think Hallmark will remain the recipient of the biggest piece of the blame pie!)

Michael Drout at Wormtalk and Slugspeak updates us on his "Crazy Sheep DNA from Medieval Manuscripts Project". While there was some human contamination, the news ain't all baaaaaaaad and progress is continuing.

I don't know about you, but I rely on others to read and interpret the chicken-scratch on dead animal hides, so paleographers are pretty important. Jonathan Jarrett provides an update on the 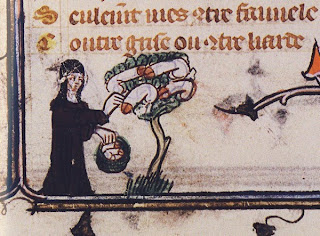 status of the Paleography Chair at King's College London. He's impressed by the effort to save the seat, but says it's too early to be fist-bumping and slapping hi-fives.

Without paleography, how could people like Carl Pyrdum at Got Medieval ever explain the significance of this manuscript drawing depicting a nun picking some "twigs and berries" (above, right). 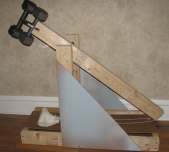 Heroic Dreams is always a fun place to stop if you're looking for ancient or medieval themed projects, like making a Spartan shield, a diorama of a castle under siege, or a tennis ball trebuchet. (No guarantees that the latter will help with your game).

Brian Murphy at the Cimmerian continues his series "Blogging the Silmarillion" and explains the links between Tolkien and Heavy Metal.

Finally, Studies of Popular Culture and the Middle Ages is always a good place to go if your looking for a mix of serious and whimsical medieval(ish) entertainment .

Now, for something completely different....You see, when I tallied up ALL of the submissions I received for this edition of Carnivalesque--from email, snail mail, phone, tweet, pager, smoke signals, braille--the sheer volume equates to....0, zip, nada. So if you ain't represented, blame yerself.

Back in the day, when I hosted the 10th and 62nd History Carnival (over at my old place), I had actual submissions to go along with my own scavenging. Sure, there was much more excitement in the early days with these new-fangled Carnivals and whatnot, but even ol' #62 saw some self-starters sending me a hint or two!

The thing about these carnivals is that they rely on bloggers with knowledge of the subject to submit posts: relying solely on the host or the Mistresses of Misrule to do all the work (I've been guilty of that too--Pie Jesu﻿ Domine. Dona Eis Requiem) can result in a very limited selection. They're only as good as we all make them. I hope I've managed to do my part this time around and I encourage everyone to give this a shot at least once! Finally, as always, thanks to Mistresses for keeping this particular carnival afloat....though, I suppose that could be taken in this context to mean it continues to fail the trial by drowning...
Posted by Marc at Saturday, February 20, 2010